Share
Tweet
If this is your first time to read my blog, please read this first:
14 Days Solo Backpacking Challenge


Breakfast is ready when I woke up. Thanks again to my host, K! But I decided to go to the Plaza and the Old Church to take some pictures, then to Central Azucarera de La Carlota before eating breakfast.

Then, I encountered some problems with Central Azucarera security because they won’t allow me to take pictures of the old train. I don’t want to argue so I used some diplomacy and a little bit of intimidation (saying I’m a writer and I will write about how you treated me, etc… hahaha! it worked!). After about an hour of talk, I was allowed to take some pics…see below, I took a lot of pictures even of its parts. The officer told me that the “Iron Dinosaur” (old train) is still working up to this day.

Story. When I get on the pumpboat/outrigger boat, I was mistaken to be a Korean. What the?! @#fkjdnf$%(@#!!!! Do I look weird? So I told them, hey Pinoy ako! Funny, they were speaking English to me (on second thought, what if talked in Korean accent?). Anyway, the sun is shining and I can feel the vibe of the sea welcoming me to another set of adventures. After some time, I started to use my lenses (again, thanks Mitch for lending me you dslr), taking some pictures of the poetic boat ride to Guimaras. Traveling solo would allow me to meet new friends because I don’t have someone to talk to when I keep silent. Also, talking to the locals would save you a lot. So I started talking to the boatmen. I even take a 2 shots of The Bar so as to show my interest with them and tell them that I’m with them in their journey. Read the conversation below (of course, it happened in Ilonggo and Tagalog):


Boatman 1: Where are you going?
James: Somewhere in Guimaras.
Boatman 2: Where in Guimaras?
James: I don’t know yet. Maybe I will look for an island to spend a night.
Boatman 3: What are you doing? Where are you from?
James: I’m traveling Negros Occidental, Guimaras and Panay Island for 14 days. Its my 5th day today. I’m from Manila (Pasay to be exact). This is an adventure trip!
Boatman 1: Adventure? Great! Would you like to stay in our island? The beach is white. You don’t have to pay anything. Just buy a liter of gasoline and we will bring you to Yato Island.
James: Really? Sure! I will go there. Thanks!
We continue to have our conversation. I enjoyed my time with them. Salamat mga Mig!

PLACES I VISITED
in Negros Occidental
La Carlota City Plaza. Where you can see Andres Bonifacio sculture and Rizal Monument. I think its better to visit it in the evening for I saw some food kiosk- a sampling of some local produce.

La Carlota City Old Church. One of the very few churches of Romanesque Architectural design with its semi-circular arches, Our Lady of Peace and Good Voyage Church was made by the faithful through forced labor (Polo y Servicios) from red bricks coming from Silay and coral stones from Guimaras. THese stones were mixed with lime and bonded using eggs.

Central Azucarera de La Carlota, Inc. (CACI). “Central Azucarera de La Carlota, Inc. traces its history to 1916 when it was estrablished by the Elizalde and Ynchausti families at Hacienda Esperanza in La Carlota, Negros Occidental at the south base of Mt. Kanlaon. Prior to its establishment, there were already two sugar mills operating in the vicinity : Sta. Teresita and Kanlaon Mills. In 1920, CACI absorbed Sta. Teresita and Kanlaon and began its operations for crop year 1920-21.”

in Guimaras
Nauway Island, Sibunag. This is the first stop-over. This island is known for their crab culture. The boatmen unloaded the Styrofoam boxes with ice for the crabs. The crabs are to be delivered to Bacolod City.

Cabalagnan, Nueva Valencia. I ate my lunch here, a small town with a port.

Yato Island. An island off the shores of Guimaras, 10-15 minutes by boat inhabited by 11 families. The community composed of 12 families welcomed me as their own. I was welcomed as a traveler, but I left as a friend to them. Here I met Joven & John Robert’s family More of this on Day 6. I will definitely come again on this island. And because this place is simply amazing and captivating, I will post another blog about it. Revisit to view more of my photos from this small island. 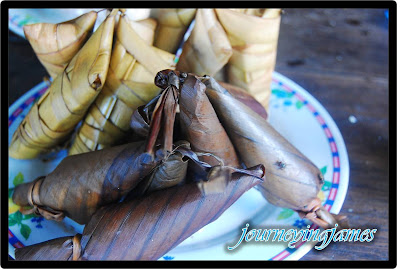 Suman. Sticky rice cooked with coconut oil and placed inside a banana leaf or coconut leaf.


Sirum-Sirum (its like anchovy, but better tasting). Tasted (as pulutan) some while I joined the Yato folks in their “shoting-shoting.” I had two shots of ESQ, again to show them that I’m with them. Very nice and good people.

Sir Warlito. The CACI head of security. At first he doesn’t want to allow me take some pictures but because of diplomacy, I was permitted (His “no” for an answer means try harder for me). He even treated me with coffee and bread from their canteen. Thanks Sir! You are doing your job well!

Em-em. The baby aboard the pumpboat.


Mang Tomy. The captain of the boat, he was serious and hard-working. Look at his eyes reflective of the hardwork he did over the years.

Raymund the conductor (one who gets the fare) and co. (See short story above). These people are very nice and cool! They even invited me to have some “shots” of the Bar. Who would deny that offer? In the many travels I did, “shotting-shotting” (drinking) is part of the culture. To drink is to be part of them. It is a string message that you are one of them, and you trust them well enough to use the same shot glass they are using. Hope to meet you again guys!

Ptr. Mark and some young people from Calvary Chapel Iloilo. Mr. Congeniality as I am, I smile to people I met. These bunch of cool Christians were with the same eatery the morning I arrived at Cabalagnan, Guimaras.

Joven (15yrs.old) & John Robert (10yrs.old). My tour guides, Joven stopped after graduating from highschool. He wakes up early every single morning to fetch water for the family. His younger brother, John is a curious boy, loves the sea creatures and knows where seashells can be found.

Some Reflections. I learned the simplicity of life and brevity of youth. The community in this island is devoid of material things, they have no electricity, no easy source of fresh water, no cellphone signal for Globe and poor signal for Smart but they are happy individuals. The kids play around while others get seashells during the low tide. (Therefore do not worry about tomorrow, for tomorrow will worry about itself. Each day has enough trouble of its own. Mt. 6:34 NIV)
I feel sad about the condition of Joven and his younger siblings, they don’t have access to informations as what Manila kids have. Their youth is so short that they are expected to be working after highschool.

P7 Tricycle (La Carlota town proper – Central Azucarera), yellow tricycle
P7 Tricycle Central – Ampang)
P10 Suman
P15 Minibus (La Carlota – Valladolid)
P100 Pumpboat (Valladolid – Cabalagnan, Guimaras)
P37 Lunch (1 cup of rice and beef steak)
P51 Gas for the pumpboat to Yato Island
P22 Bread
————-
P249 (whew, that was close!). I thank the family of Joven and John Robert who welcomed me to their house, I slept on their kubo with their kids. That was great and I feel I’m part of the family. So, I didn’t pay anything for accommodation. They were also kind enough to prepare me some dinner (rice & pork nilaga).