Mama: Ok, ingat. Saan ka nga pupunta?
James: Backpacking Trip- Negros, Panay at kung saan-saan
Mama: Ok, mag-text ka.
James: Kulang pa yung pera ko e.
Mama: Wala na akong pera.
James: (sa isip lang) Ayos! Pareho pa tayo. ‘Wag nang ituloy ito…
——-
English version
James: (European accent) Mommm, I’ll be leaving tomorrow.
Mom: Okay. Take care. Where are you going again?
James: Backpacking Trip- Negros, Panay and many more…
Mom: Okay, just text me your whereabouts.
James: (Hoping I get more pocket money) I don’t have enough money.
Mom: I don’t have money.
James: (just on my thoughts) Yikes!
——
That’s my last conversation with my mom before I left our house on the eve of July 5, 2010 with less than PhP4,000.00 on my pocket. I am on a solo backpacking trip (July 6-21), I left my ATM card and credit cards so I don’t have Plan B and not exceed my PhP250/day budget ($6.00) which includes everything- accommodation, food, transportation, etc.
Today starts the reporting of what happened during the trip that lasted 14 days. You can check out the game plan HERE.
Lucky me, a friend of mine lend me her Nikon DSLR which would help me share the story visually. Thanks again Mitch! I also have another camera (used when running, 2MP Casio Exilim) which Imo (another friend) lend me months before.  I don’t know how I will thank both of you.

I woke up the next morning at 5:30am, I have to be in Terminal 2 before 8:00am as my flight is 8:40am. As usual, I was late. I arrived at T2 around 8:20am, still trying to catch my breath because I was running fast only to learn that the check-in counter is already closed (poor me) I wanted to cry. I’m familiar with this kind of situation because this happened to me a lot of times. I approached an airline officer and good thing, he allowed me to board the plane. Whew! That was one tough move.

Nothing much to share on the plane, I was at the back near the comfort room. After about an hour travel I arrived at Bacolod-Silay Airport.


Finally, my Php250 starts today! The EXCITEMENT on this journey just drives me crazy. I was observing at the airport, listening to “Ilonggo” conversations. I just realized that I’m on a foreign ground. Calling my ‘charisma’ and ‘adaptability’ to help me on my first day.


I started by asking the cheapest way to go to Silay town proper. I asked the van operators and they are charging me P50 (P150 to Bacolod City). There should be another way, just near the airport’s gate, tricycles are waiting for passenger. The fare? P10 only. You just have to wait for the other 5 passengers (great, I saved P40). I did my first taste of Negros by eating piaya.


It’s hard to tell every detail of my adventures and misadventures, so I think it would be easier if I just do some bullets of the ff: 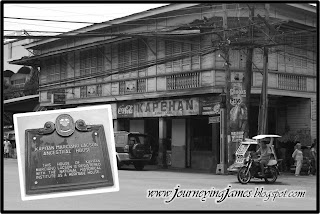 Ancestral houses complex. I did a DIY walking tour using the map given by the tourism office (you should really drop by and get the free map). You would spend about 2hours or more on the walking tour.


Cinco De Noviembre Marker. The marker say, “On this part of Silay stood the drugstore where Negrense Revolutionaries Secretly helped plan the successful revolution against Spanish Colonial forces in November 5, 1898. Hence, this street was named Cinco de Noviembre.” Cool! An insightful dose of history for me, kudos to our Negrense heroes (see the 1st pic above)!


Balay Negrense. This house is among the 29 ancestral houses in Silay that the National Historic Institute had declared as national treasures. This house fuses Spanish and American architecture, made using the Balayong tree trunk as foundation designed and built by Don Victor Gaston around 1898 for his family. Open on Tuesday-Sunday (10:00am-5:00pm). Admission Fee: Adults (P40); Negros Resident (P35); Students and children (P20).


San Diego de Alcala Pro-Cathedral. Designed by Lucio Bernasconi, an Italian architect in 1920, it is famous for its dome is similar to the Basilica of St.Peter in Rome. This most enduring and biggest landmark is a testament to the Silaynon’s deep faith and devotion to God.


Guinhalaran Pottery Village. Too bad it began to rain hard when I arrived here so I wasn’t able to see the potters do the real thing. Bacolod City
SM City Bacolod. No choice, have to meet someone here.
The New Bacolod City Government Center. I like its architectural design- amazing to look at especially at night with the fountain in front of it. “Sayang, I’m not with ‘someone special’ during that time, romantic pa naman.”
Provincial Capitol of Occidental Negros.

Piaya. Of course! You haven’t been to Bacolod if you will not taste their piaya (look at the pic below).
KBL. Kadios, Baka at Langka (beans, beef and jackfruit) is their version of Tagalog’s “nilagang baboy,” more tasty “namit” (delicious) I should admit. I just ate on a “carinderia” near the school, its cheaper and you enjoy the soup while perspiring.


PEOPLE I MET
Mr. Severino Pacete. He is the Tourism Officer of Silay City. He was very helpful. He even let me leave my backpack and some stuff in his office so I can do the walking tour without my heavy bag. Thanks again Sir!
Deneb A. His a friend from UPLB now based in Bacolod City. He taught me some basics in using DSLR. Thanks for the jeepney fare treats and for accompanying me to tito’s home.
David Reola. At around 2pm I received a text from my mom. She said that she has a cousin in Bacolod. Great, I now have a place to stay. Thanks Tito for the overnight stay and for the dinner.
Carlos Reola  and his friend Lyndon. Carlos is my second-cousin, after dinner he toured me to the Municipal Bldg and the Provincial Capitol with his supah fast motorcycle. Thanks for the football jersey dude! I’m sorry but I have to give it to the place where I stayed in Guimaras because I have nothing to give them.

20 thoughts on “Day 1: Touchdown at Silay-Bacolod”