Share
Tweet
I think this the beauty of Miag-Ao Church gets so much attention to the point that everyone forgets about San Joaquin Church just 15minutes away from Miag-Ao. I even think that San Joaquin Church is more beautiful than Miag-Ao. But still we cannot compare them because each has a beauty of her own. 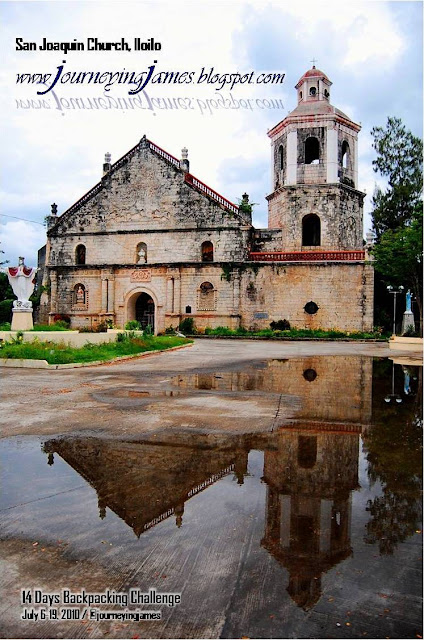 Reflections: San Joaquin Church and Belfry
Built in 1859 and finished 10 years after (1869), the San Joaquin Church rivals the stone carvings of Angkor Wat in Siam Reap, Cambodia. The church’s facade depicts the Battle of Tetuan- the war between the Spanish Christians and the Moroccan Moors.
This work of art ‘Rendicion D Tetuan’ was spearheaded by Fr. Tomas Santaren, done by contracted Chinese, Mexican and Spanish artists using coral stones (from the nearby shores) and limestones (from the mountains of the nearby town, Igbaras), as their medium. It is said that townfolks are required to help building the church as they are forced to cut stones to be designed by the master artists. 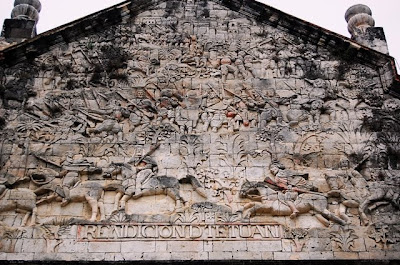 Intricately carved limestones.
With its militaristic motif, this church distinguishes herself from other old churches in the Philippines. It was said that one of the artists of this beautiful bas-relief was honoring his father who was one of those who fought at the siege of Tetuan. If that is so, this is a labor of love and of continued perpetuity.
Adding to her glory, the National Historic Institute declared this cultural gem a national historic site last January 14, 1974.
San Joaquin is  situated 54kms from Iloilo City, the last town on the Southwestern part of Iloilo. Its just an hour away from Iloilo City.

Beach– Just a stone-throw away you can swim on the beach, its for free of course.
Campo Santo– literally “Field of Saints” or their cemetery which sits on a hill overlooking the ocean is just a kilometer away.

Rafflesia Flower– the biggest flower in the world is also found in Bad-as, San Joaquin.
Batchoy– I think San Joaquin offers something that is better than Ted’s Batchoy. I tasted it at Charlyn’s Batchoy Eatery (near the church, infront of the public market) for only P25.
How to get there:
The most popular mode of transportation to San Joaquin is the jeepney, terminal is at Cor.Fuentes-De Leon Street, Supermarket, Iloilo City.
Fare: PhP60-65
All buses and jeepneys going to Antique pass by San Joaquin, the Antique bus terminal is located at San Pedro Street at Molo.
From Panini-y, Antique: Its just an hour and 30minutes bus/jeepney ride.
Special thanks to Ms. Erlyn Alunan, the town’s tourism officer, for the the informations she has given. If you are visiting San Joaquin be sure to drop by at the Tourism Office which is just a few meters from the church.
All photos are unedited and copyrighted, if you are going to use it
please ask permission first from  <yarp83ATgmailDOTcom>. Thanks!